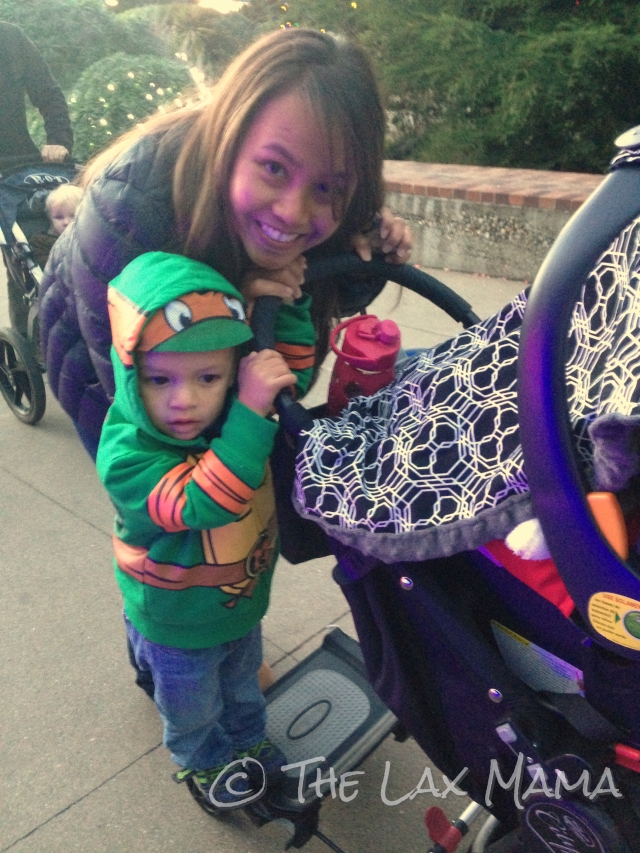 Instead of buying a double stroller I bought the Baby Jogger Glider Board.  I liked how it encourages Oliver to walk more, but can give him a needed break on long outings like the zoo.  At first I really liked it, but the more we used it the more I fell out of love with it.  Oliver still loves it, but he’s just too tall for it.  As pictured above, he is always standing to the side because the handle bar of the stroller is in his face (plus he can’t quite see what’s up ahead).  This may be different if we had the City Mini GT, but we have the City Mini and it’s just awkward.  If you are pushing the stroller it is also awkward for the parent because the handle bar doesn’t stick out far enough.  You end up kicking the glider board, so you either walk weirdly, like a straddle, or you kind of guide the stroller along from the side.  When the glider board isn’t in use you can kick it up easily and it has bands to keep it up.  But it just falls down–A LOT!  It’s so annoying that I just take the glider board off the stroller when I know I’m not going to be transporting Oliver around.  The installation and disassembly of it isn’t so bad, so I take the time to do it.  The board makes the stroller significantly heavier and bigger when you are trying to lift it in and out of the trunk of your car.  I love how the City Mini has a small foot print and how light it is compared to other traditional strollers.  But once you attach that glider board it is very heavy and doesn’t lie as flat as it does without.

For right now it’s not a big deal because Sammy is still small enough that I can put her in the Ergo if Oliver is tired and wants to ride in the stroller.  I’ll have to worry about what to do when she becomes too heavy to wear.  Hopefully I have another year before it becomes a problem.